SINGAPORE — While Tesla’s $1.5 billion investment in bitcoin has added to recent excitement over cryptocurrencies, the blockchain technology that underlies their use is creating another opportunity in capital markets — which Singapore is doing its best to capture.

The city-state, one of Asia’s bigger financial centers, is emerging as a trading hub for digital securities, or security tokens backed by financial assets. Exchanges to trade these innovative securities are being set up by both local and external players, which hope to attract issuers and investors to their platforms. Growth in Singapore is also spurring initiatives in other Asian countries such as Thailand and Japan, confirming its regional hub status.

Using blockchain technology — which creates secure ledgers for digital transactions — digital securities exchanges enable instant settlement at lower cost as well as fractional ownership of the underlying asset. Often these are alternative assets that would otherwise not be listed, such as private equity or hedge funds. Listing requirements are generally much lower than on traditional public exchanges, giving more fundraising opportunities for issuers such as young startups.

One of the leading companies is iSTOX, a Singapore-based private platform operated by local company ICHX Tech, which counts Singapore Exchange (SGX) and state investor Temasek Holdings as shareholders. In January, iSTOX said it had raised $50 million to increase its overseas presence to draw more issuers and investors.

Chief Commercial Officer Choo Oi Yee told Nikkei Asia in an interview that it aims to have 20 listings on the iSTOX platform, up from seven, by the end of this year. It wants to attract the region’s unlisted big startups, like ride-hailing “superapp” Grab, to the platform to raise funds through digital securities. 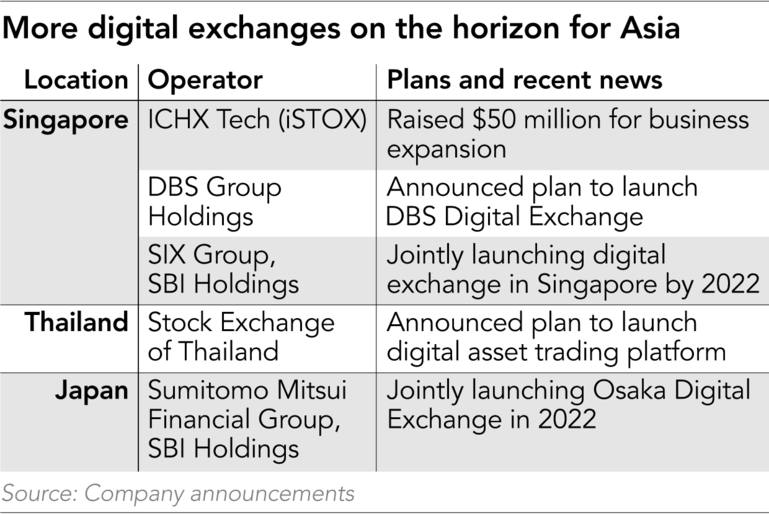 “For young companies, especially in Southeast Asia, there are a lot of companies that are still not very familiar or not too well known. They would like an avenue to raise capital, and they see us as a convenient place to do that,” Choo said. She said of Singapore, Indonesia and Vietnam, “There are some very interesting companies that we would like to onboard at some point.”

One advantage touted by digital platforms is ease of access for issuers and investors.

While a public listing on a traditional exchange requires a year or even more for preparation, an offering on iSTOX will need about three months, according to the company. Meanwhile the exchange allows accredited corporate and individual investors to trade. For individuals, one criteria is net personal assets exceeding SG$2 million. About 1,000 investors from over 20 countries have registered for trading, it said.

Singaporean fund Elite Partners Capital, which did two digital issuances on iSTOX last year, told Nikkei Asia the listing “made a lot of sense” for them.

“We did our first issuance at the peak of the pandemic lockdown. None of us could leave our homes, so we had to reach out to investors using technology,” said portfolio director Enoch Tan, adding that speed of access to the market was another advantage of digital issuance.

He said digital issuance allowed the company to “reach a different category, the more tech-savvy investors.”

Among those coming after iSTOX is Singapore’s largest bank, DBS Group Holdings. It is launching a platform called DBS Digital Exchange for the issuance and trading of digital tokens backed by shares in unlisted companies, bonds and private equity funds.

Another local private exchange, HGX, is operating under the Monetary Authority of Singapore’s regulatory sandbox — a local program that allows fintech players to experiment with services within a limited environment and relaxed regulatory requirements. Another is planned by Swiss bourse group SIX and Japanese brokerage SBI Holdings, which jointly plan to launch in Singapore by next year.

MAS has been an active promoter of fintech business, hoping to attract investments and entrepreneurs and contribute to the country’s development.

“Singapore is largely seen as the test bed for innovations in the region, and its ambition to become a trading hub for digital securities comes as no surprise and is actually complementary to its status as a regional financial hub,” Justin Tang, head of Asian research at United First Partners in Singapore, told Nikkei Asia. 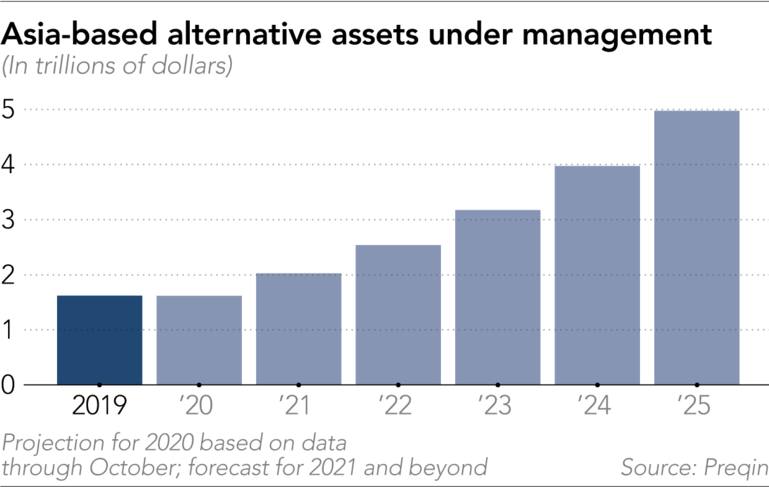 Beyond Singapore, the Stock Exchange of Thailand announced in January that it would launch a platform for digital asset trading, “to widen business opportunities and revenue streams to the capital market’s operators while offering new investment alternatives to investors.”

Japan’s Sumitomo Mitsui Financial Group and SBI Holdings also in January jointly announced a plan to launch the Osaka Digital Exchange in 2022, which they say will be the first private exchange in Japan to handle digital securities. The Japanese government in 2020 amended its Financial Instruments and Exchange Act to include rules for security tokens.

Ultimately, these movements are motivated by the huge volume of nonlisted assets in the world, from private equity to real estate. According to Preqin there were about $1.6 trillion of private market assets in the Asia-Pacific region last year, and the volume is expected to grow.

“There are so many other exchanges that want to fight in this space because the market is so big and nobody has really captured the market. In the private space, there’s still a lot to do,” said Choo of iSTOX.

Tang of United First Partners pointed out that digital exchanges will have to have “a diverse investor and issuer base coupled with a large pool of securities and related products” to compete, as higher liquidity is a key to an exchange.

Digital securities markets also have to overcome any user reluctance to trade in cyberspace, as well as concerns over their looser listing criteria compared with traditional exchanges.

“Security issues will be foremost, given the nature of the securities and the digital medium of exchange,” said Tang. “Beyond that, there will also be privacy and corporate governance issues to balance and consider.”

Another challenge for these digital exchanges is pricing of the underlying assets. Choo of iSTOX said: “We will hopefully, when we get bigger, have market makers so there’s a bit more liquidity and a bit more transparent pricing. But for now, we’re a bit too small for that.”

Digital exchanges will potentially threaten traditional exchanges as they grow. But Choo said both sides can coexist and help each other — giving the example of Grab, one of Singapore’s best-known local unicorns.

“Singapore has always been trying to onboard growth companies. If we can provide a market that already understands Grab pre-IPO, that makes it easier for SGX to say, ‘Why don’t you list on SGX,'” she said. “There are a lot of complementary things we can do.”